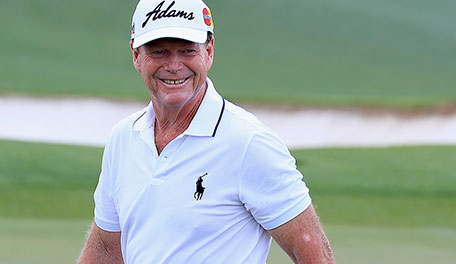 There's a familiar name atop the early leaderboard at the U.S. Senior Open.

Tom Watson, 65, came within one shot of shooting his age, opening with a 4-under 66 at Del Paso Country Club in Sacramento, Calif. He needed just 26 putts to complete his round.

Watson overcame an early double bogey to move to the top of the standings, carding four birdies over his inward half to sit one shot ahead of a number of players at 3 under, including two-time U.S. Open champ Lee Janzen. Watson, who won the U.S. Open in 1982, has never won this event, finishing second in 2002, 2003 and 2006.

Watson's last Champions Tour victory came back at the 2011 Senior PGA Championship, and he hasn't recorded a top-10 finish in four Champions Tour starts this season.

Watson nearly became the oldest player to ever win a major at the 2009 Open Championship, and with 54 holes still to play in temperatures that are expected to eclipse 100 degrees, he could become the oldest winner of a Champions Tour major. That record currently belongs to Jock Hutchison, who won the 1947 Senior PGA Championship at age 62, while Allen Doyle became the oldest U.S. Senior Open champ when he won in 2006 at age 57.