Watson stalls out, trails Harman by 1 at Travelers 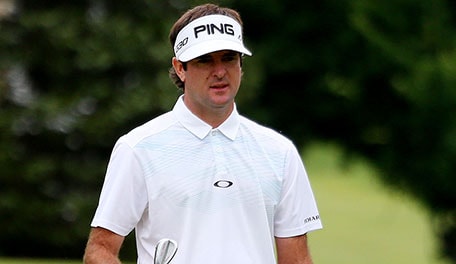 Bubba Watson has been leading all week at the Travelers Championship, but after three rounds there's a new southpaw from the University of Georgia atop the standings. Here's how things look at TPC River Highlands, where Brian Harman now leads by a shot:

What it means: Harman began the day two shots behind Watson, but he made a steady move up the board with a bogey-free 65. While Watson stalled on the back nine, making only one birdie across his final 12 holes, Harman kept the birdies coming and took sole possession of the lead after stuffing his approach to No. 18.

Round of the day: Snedeker started the morning seven shots off the pace, but he climbed into contention with a 7-under 63. Snedeker sparked his round with three straight birdies on Nos. 2-4, then added three more in a five-hole stretch from Nos. 13-17 to put himself in position for a fourth straight top-10 finish.

Best of the rest: Patrick Rodgers went out in the first group of the day and made a big move with a bogey-free 63 to get to 9 under. Rodgers, who secured his special temporary membership earlier this month at the Memorial, carded five birdies on the back nine en route to an inward 30 that he capped with a 22-foot make on No. 18.

Biggest disappointment: Brian Stuard began the day in a tie for second, two shots off the lead but fell back with a 1-over 71. Stuard made only one birdie, adding two bogeys to fall six shots off the pace and essentially assure that his search for a maiden victory will last at least another week.

Main storyline heading into Sunday: A shootout seems to be brewing at TPC River Highlands. While Watson has been the story all week, the spotlight now shifts to Harman, who won the John Deere Classic last year in another event where birdies were required by the bunches over the weekend. The leaderboard features a healthy mix of veterans looking for a breakthrough win (DeLaet, Stroud) and big names looking to pick up another momentum boost as the Open Championship nears (Snedeker, Johnson).

Shot of the day: DeLaet nearly made an albatross on the driveable par-4 15th, hitting his tee shot to within 6 feet of the hole. The subsequent eagle helped him to a 64 and earned him a spot in Sunday's final group.