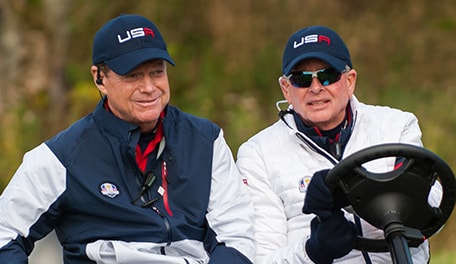 Watson was recently offered induction by the PGA, but publicly declined in a texted statement to Golf World.

"While I was very flattered by PGA of America President [Derek] Sprague's honoring me to be inducted into PGA Hall of Fame," Watson wrote, "I couldn't accept in good conscience because of how the PGA mishandled the firing of my friend and immediate past president of the PGA, Ted Bishop."

Watson, an eight-time major champion who led the U.S. to a Ryder Cup victory in 1993, was Bishop's choice to lead the U.S. team at Gleneagles last year, which ended in a lopsided loss, a semi-mutiny led by Phil Mickelson, and ultimately the creation of the U.S. Ryder Cup Task Force.

Bishop was removed as PGA president weeks later when he responded to Ian Poulter's criticisms of 2008 European captain Nick Faldo on Twitter, with Bishop calling Poulter a "Lil' Girl." The PGA at the time said that its "board deemed the remarks to be inconsistent with the policies of the PGA."

In response to Watson, a PGA of America spokesperson told Golf World: "We have a great deal of respect for Tom Watson. He is a worthy and deserving Hall of Famer, and the door will always be open for him."