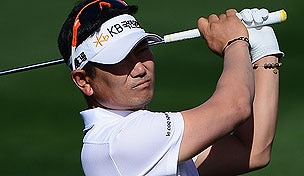 Getty Images
Jordan Speith speaks with his caddie Michael Greller on the sixteenth tee during the final round of the Shell Houston Open at the Golf Club of Houston on April 5, 2015 in Humble, Texas. (Photo by Scott Halleran/Getty Images)  -

SCOTTSDALE, Ariz. – Sometimes a first major championship title opens the floodgates for a player, leading to even more success. Other times, it stands as a symbol of just how difficult it is to claim the hardware.

Take the cases of Bubba Watson and Y.E. Yang as examples of the latter.

Watson won the 2012 Masters and Yang won the 2009 PGA Championship, but neither has secured another PGA Tour victory since those major triumphs.

Perhaps that could change this week, as they stand as co-leaders through the opening round of the Waste Management Phoenix Open with matching scores of 7-under 64.

“For five years I played on the Tour without winning, then I won real fast,” Watson explained. “Then winning the Masters, hitting the hook, it changes. … You're trying to figure out the golf course with all the attention after having that green jacket on you. Yeah, you're always trying to get better and learn. So, you know, now hopefully I'm at a steppingstone where I've learned. Now if I win a few more, I get nervous again. Right now I'm in a good spot.”

“I had that first-time experience after my PGA win in 2010 where I shot a double on 17 and lost my chances to win,” Yang said. “You have to really balance it out, but you still have to be a little bit more aggressive than other tournaments.”