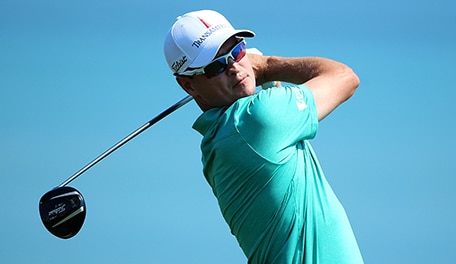 SHEBOYGAN, Wis. – Zach Johnson may get this weekend free to polish the Claret Jug.

The winner of The Open Championship last month, Johnson doesn’t look like he will be adding the Wanamaker Trophy as the PGA Championship winner. In fact, he may be headed home when the cut is finally made at the weather-suspended event. After following up his 3-over-par 75 Thursday with a 72 on Friday, he was one shot off the projected cut line.

Johnson can blame a wayward driver for his early exit. He hit just five fairways at Whistling Straits on Thursday and only seven on Friday.

“That’s my strength, and it wasn’t my strength this week,” Johnson said. “Very frustrating.”

Johnson is one of the straightest drivers in the game. He ranks fourth on the PGA Tour in driving accuracy this year. That control helped him win his second major earlier this summer. Johnson, though, said his driver hasn’t been quite right since he won at St. Andrews. He didn’t like the way it was behaving when he finished 33rd at the WGC-Bridgestone last week.

“I have to rely on my driver to score. I mean, my iron play out of the fairway is very good. I'm not used to hitting out of the rough. I don't have a steep golf swing, so it makes it even harder.”