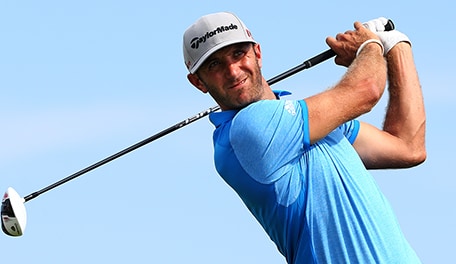 SHEBOYGAN, Wis. – The horn was a welcome sound for Dustin Johnson.

The first-round leader at the PGA Championship had just bogeyed three of his last four holes and was the only player in the top 40 who was over par for the day when play was called because of inclement weather.

Johnson was at 5 under through 14 holes, four shots off the lead at Whistling Straits.

“Hopefully it will help me out,” he said. “I’m just struggling a little bit. It felt like I was hitting some good shots, but I’m just not driving it as well today. This golf course, if you are not driving it in the fairways, it’s tough.”

Johnson, who opened with 66, has hit just four of 11 fairways so far in his second round, a day after finding the short grass 10 times.

His weekend struggles have been well-documented.

In his last six major starts, Johnson is 37 under par in Rounds 1 and 2, but 6 over par during the final two rounds.

“Hopefully I can come back in the morning and make a couple of birdies coming in and then we’ll get the day started on Saturday,” he said.