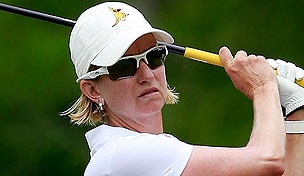 Hall of Famer Karrie Webb’s bid to make history and win the Australian Ladies Masters for a ninth time at Royal Pines in Queensland, ended Friday in disappointing fashion.

Webb was disqualified for signing an incorrect scorecard.

“She needs to verify all her 18 hole scores,” tournament director Fraser Munro told media. “That's her duty. She's not properly checked her scorecard and left the recording area.”

Webb, playing in front of family and friends in her Australian homeland, battled all day to stay inside the cutline. If she had signed a correct scorecard, she would have made the cut right on the number, with a 3-over 149. That would have left her 13 shots behind the leaders, American Cheyenne Woods and South Africa’s Stacy Lee Bregman.

“Golf being a game of integrity, she did the right thing, came straight away and brought it to our attention,” tournament director Fraser Munro told media Down Under. “Initially, she just wanted to get to the bottom of the problem. I think as soon as we established she had a 5 on her card [at the 12th] she was obviously upset. She's the defending champion this week. She's now not going to be able to go on and defend. She's quite capable of low scores at this course and she'll be extremely disappointed.”

There appeared to be no quotes from Webb in media reports from the event.