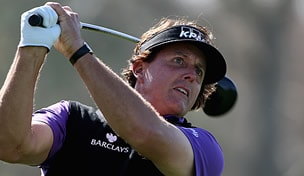 Getty Images
Dennis Walters goes into his backswing with his rubber-shafter club.  -

The West Coast swing usually serves as a springboard for Phil Mickelson.

For the first time in his career, the San Diego resident failed to record a top-10 finish in any start on the Left Coast. Mickelson made only three appearances – his fewest ever – and withdrew from Torrey Pines, tied for 42nd at the Phoenix Open and finished joint 19th at Pebble Beach.

Mickelson has made as many as six starts in a year on the West Coast swing (2006), and he usually tees it up in four or five events. In all, 19 of his 42 career titles have come on the West Coast.

For Mickelson, at least, a strong West Coast typically signals the beginning of a good year, major or not.

• 2004: He posted top 10s in all five starts, including a victory at PGA West. That year, he won twice, including his breakthrough major victory at the Masters, and had a whopping 13 top 10s.

• 1996: He had two wins in four starts on the Left Coast, then tacked on two more wins and eight top 10s overall.

The 43-year-old is skipping both Riviera and the Match Play and will return at the Honda Classic.