Westwood continues to have success at Honda 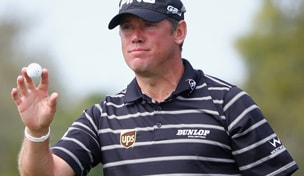 PALM BEACH GARDENS, Fla. – Over the past five years, there hasn’t been a more consistent fixture on the Honda Classic leaderboard than Lee Westwood.

The Englishman has cracked the top 10 three of the past four years at PGA National, and this week he’s at it again following a 5-under 65 Friday that put him at 7 under, four shots behind tournament leader Rory McIlroy.

“I really enjoy playing this golf course. It’s a demanding test,” said Westwood, who followed an opening bogey with six birdies during his second round. “There’s a lot of holes out there where there is no bail out; you’ve got to stand up there and hit your shot. It’s a major-style golf course in certain ways.”

A resident of nearby West Palm Beach, Westwood is one of many players staying at home this week, and the 40-year-old enjoys the rare opportunity to compete amid familiar confines.

“I’ve got a lot of supporters here obviously,” he noted. “You get used to playing in the conditions.”

After last year’s tournament saw cool temperatures and brisk winds, though, Westwood remains surprised at the relative lack of breeze through two rounds at the Champion Course, which has largely contributed to a lower-than-usual scoring average through 36 holes.

“I’ve never seen it this calm,” said Westwood. “I live here and it’s normally windy, and the wind normally keeps it cooler. But you know, whatever the conditions are, they are. It’s just not stereotypical this week of how it normally is down here.”

While he’s factored often at this event in recent years, Westwood has struggled of late to rekindle the form that took him to world No. 1 in 2010 and earned him a 54-hole lead at the British Open last summer. After making a high-profile coaching change, Westwood is eager to start trending in a more positive direction as the season’s first major approaches.

“It’s not there yet, but I would say it’s coming back,” he added. “I feel confident being able to hit it at one side of the green and shape it in. I’m starting to get that fade back that I always used to hit.”