A wet and wild Open? Players bracing for nasty conditions 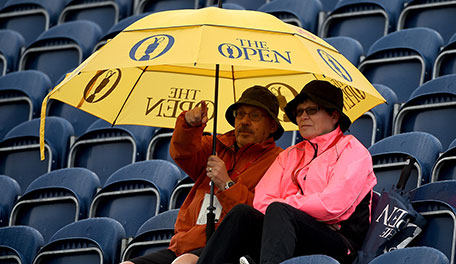 ST. ANDREWS, Scotland – The forecast for the second and third rounds here is so miserable that players have been talking about it since they arrived at the Old Course.

Sure, the weather can change on an hourly basis, but right now players are bracing themselves for heavy rain and winds gusting to 40 mph.

“It looks as if we’re going to have some rough weather coming up,” R&A chief executive Peter Dawson said Wednesday, “and that’s the Open Championship.”

When the weather gets nasty, it often becomes a test of patience and attitude as much as skill.

“I think it’s fun,” Jordan Spieth said. “If we wanted good weather we’d go play in California. We come over here because we want to embrace the opportunity of handling these conditions.”

The world No. 2’s positive outlook stands in stark contrast to that of, say, Bubba Watson, who said the unique challenges of the Open – the quirky layout, the unpredictable bounces, the high winds, the driving rain – add up to what “on paper is probably not the best for me.”

Rickie Fowler smiled when asked about the unpredictable weather. He said his third-round 68 in blustery conditions in the 2011 Open at Royal St. George’s was “one of the best rounds I’ve played.”

Oftentimes on the PGA Tour, players will seek shelter when a big storm rolls through. "Over here," Fowler said, "it’s just hard wind and sideways rain sometimes. I think the biggest thing for me was going out and trying to make it as fun as possible and embracing the challenge."

In no other major does the luck of the draw play such a significant role, and players stuck in the worst of the conditions can watch their title hopes blown off course.

Rarely does the entire field face the same conditions over the first two rounds. Last year at Royal Liverpool, the first-round conditions were perfectly calm in the morning, only for the wind to howl in the afternoon. The opposite was true the next day, leading to many in the late-early wave to grumble about their bad fortune.

“You just hope over the course of a career that that evens itself out,” Justin Rose said. “I’d say the last five years I’ve been on the wrong side of things, but I was looking forward to maybe lady luck turning and going my way this year.”

Spieth, who starts at 9:33 a.m. local time, looks like he’ll get the best of the conditions Thursday, with the outlook calling for a “dry and bright start with some sunshine.” The wind is expected to increase from 5-10 mph to late-afternoon gusts of 25 mph.

Friday’s forecast calls for heavy rain and a steady 20-mph breeze in the morning, followed by gusts (out of a different direction) up to 40 mph in the afternoon.

“Obviously everybody would like it to be equal for everybody, but that’s part of the challenge,” Spieth said. “That’s part of the week this week. I certainly am trying to look at it as positively as possible because I don’t feel like there’s any other way to go about it.”