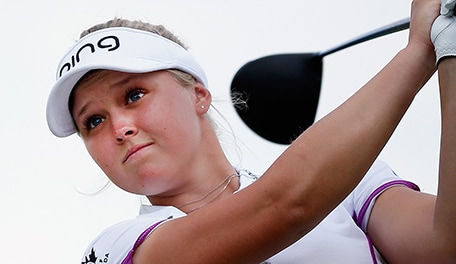 Brooke Henderson’s petition for a waiver of the LPGA’s rule requiring members to be 18 was granted Tuesday by tour commissioner Mike Whan, allowing Henderson to immediately claim tour membership for the rest of this year and through next year.

That means Henderson, 17, will tee it up Thursday at the Canadian Pacific Women’s Open as an LPGA member.

“Brooke truly earned her card, and we are looking forward to Brooke joining our tour and our family,” LPGA commissioner Mike Whan said. “She’s a special player and a wonderful person.”

Henderson will play out of Category 7 on the LPGA’s priority list, a category reserved for non-members who win an LPGA event in the previous calendar year.

As a non-member winning the Cambia Portland Classic Sunday, Henderson had the right to claim tour membership. However, because she doesn’t turn 18 until Sept. 10, she required a waiver of the age rule to play as a tour member this week. The only question in the wake of her victory was whether she would seek to take up membership this week or defer membership until next year.

After huddling with her family and her agent, IMG’s Kevin Hopkins, Henderson decided Monday night to seek to take up membership this week. By doing so, Henderson’s officially a rookie this season. If she had deferred membership, she would be considered a rookie next year. By deferring, she would have gained membership for 2016 only.

“Since I was a little girl in Smiths Falls, Ontario, my dream has been to play on the LPGA tour,” Henderson said. “I am so grateful for the opportunity to join the tour as a member and play alongside so many of my role models.

“Realizing this dream here at the Canadian Pacific Women’s Open in my native Canada is even more amazing, and I am so proud to be an ambassador for golf in this amazing country. I would like to thank Commissioner Mike Whan, the LPGA tour staff, and all my sponsors, fans, friends and my amazing family for all the support I have received.”

Though Henderson has won $661,264 in 10 LPGA starts this year, the money’s considered unofficial. She’ll tee it up Thursday with zero dollars in official money and zero points in the Rolex Rookie of the Year standings.

Henderson has guaranteed herself a spot in the Evian Championship next month and in the season-ending CME Group Tour Championship. She also met the deadline Tuesday for filing to commit to play in next week’s Yokohama Tire Classic in Prattville, Ala. After the Yokohama Classic, the LPGA moves in to its Asian swing and the limited field events there and the limited field event at the Lorena Ochoa Invitational. She’ll have three events to climb the money list fast to try to qualify for them. The Sime Darby is for the top 62 money winners. The other Asian events have even more stringent field requirements, though spots do open for players who are higher on the money list, depending on who skips those events.