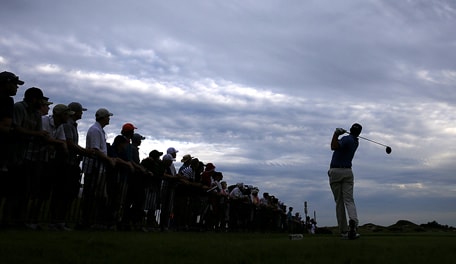 SHEBOYGAN, Wis. – The morning wave appeared to get the better end of the draw on Day 1 at Whistling Straits, as the winds strengthened in the afternoon.

“It was beautiful conditions,” said Matt Kuchar, who opened in 4-under 68. “This was definitely the time to take advantage of the golf course. Probably as easy as we have seen this place play.”

“It was pretty calm on the front nine and picked up as my back nine went on,” Henley said. “Like the last couple holes, when the wind was picking up, it really makes it a lot different course.”

James Morrison shot 69 and then said his plans for the rest of the day included “just chill in the afternoon and watch the wind blow.”

Twenty-five of the 78 early competitors posted an under-par score. Dustin Johnson set the early pace with a 6-under 66. Jason Day, playing alongside Johnson, posted a 68.

"We got off to a pretty good start with the wind being a little bit quieter this morning, rather than this afternoon," Day said. "I feel like we have the beter side of the draw currently right now."