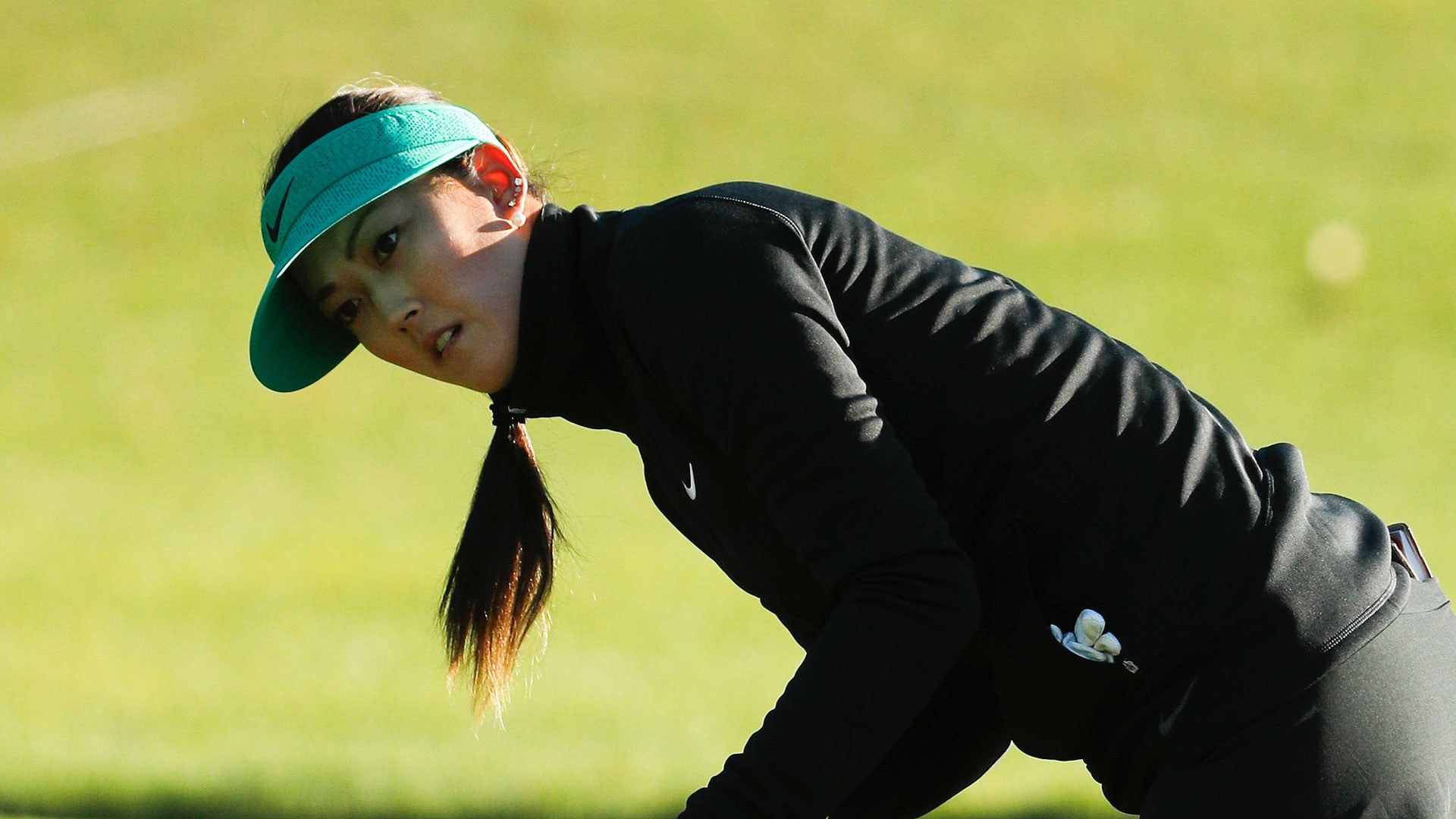 RANCHO MIRAGE, Calif. – Michelle Wie was doing her best to channel Jack Nicklaus in Thursday’s start to the ANA Inspiration.

While Wie is still using her tabletop stance over longer putts this week, she has adopted her version of the Nicklaus crouch for shorter putts.

What inspired the change?

“Just kind of see pictures of Jack putting and stuff, and just try to emulate it,” Wie said. “Trying to kind of copy it a little bit, feeling more centered, feeling more balanced. Putting is all about that feel thing.”

Wie used the new stance to post a 2-under-par 70, a solid opening round in what’s been a sluggish start to her 2016 season. Wie plays out of the Bear’s Club in Jupiter, Fla., so she sees a lot of photos of Nicklaus around the place.

“You need a little bit of a spark, just a comfortable feeling, and that kind of worked for me today,” Wie said.

In her “Jack stance,” Wie bends her knees more than she does in her table-top stance, and though she doesn’t hunch as much as Nicklaus did, she does hunch over the ball. The big difference is that Wie makes the stroke with a left-hand-low grip.

David Leadbetter, Wie’s swing coach, planted the seed to the change when they were practicing Tuesday at Mission Hills.

“I wanted her to get more open,” Leadbetter said.

Leadbetter was trying to get Wie in position to see the line better.

“She took it a step further,” Leadbetter said.

Wie is looking to jumpstart her year, and this is a good place to do it. While Wie has never won at Mission Hills, she has made a number of stirring runs into Sunday contention in this major. She has five top-10 finishes in this major.

After last year’s woes, with the hip, knee and foot injuries, Wie was eager to regain the form that helped her win the U.S. Women’s Open and Lotte Championship in 2014. In six starts this season, she has missed two cuts with no finish better than her tie for 25th at the Coates Golf Championship. She didn’t have a top-10 finish all of last year.

“The body's really starting to feel good,” Wie said. “It takes awhile to come back from an injury, and I think finally I'm just getting stronger and getting my strength back and flexibility and everything. It's something I have to look out for, but, I’m feeling good.”

Wie hit 14 greens in regulation despite hitting just seven fairways. She took 30 putts in a round of four birdies and two bogeys.

“Just want to take it a shot at a time, tournament at a time, just not think too far ahead, not dwell in the past too much,” Wie said of trying to turn around last year’s misfortune. “But I'm happy with the way I played today, and hopefully I can build upon that the next three days.”

At year’s start, Leadbetter had a heart to heart with Wie, telling her it was time to quit the constant tinkering with her swing.

“Michelle is the consummate tinkerer with her golf swing,” Leadbetter told GolfChannel.com at year’s start. “I’ve never seen anybody in all my teaching career who is able to change her swing so drastically from almost week to week.”

Leadbetter told Wie it was time to commit and stick to a swing to harness all her potential. They went to work going back to the longer, more fluid and more natural swing of Wie’s youth. Basically, Leadbetter was concerned Wie’s swing had become too short, and it was affecting her rhythm and putting too much pressure on her hip and knee joints.

Two months into the season, how is Wie doing with the more natural approach?

“She’s doing well with it,” Leadbetter said. “I knew she wouldn’t stick to it 100 percent.”

Leadbetter said their work this week is on making sure Wie gets to parallel with her backswing, instead of reverting to that short, compact swing she was making last year.

“It’s like anything else,” Leadbetter said. “It’s the trust factor. She’s trusting it more. It’s also about taking the swing from the range to the course.”