Wie credits putting for 72 not being higher 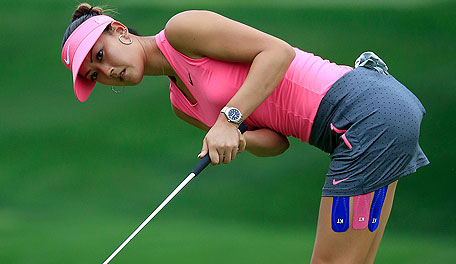 LANCASTER, Pa. – Michelle Wie was frustrated she couldn’t get her irons dialed in for the first round of her title defense at the U.S. Women’s Open Thursday, but she left Lancaster Country Club believing her new swing is close to where she needs it to contend this week.

Wie opened with a 2-over-par 72, six shots behind the co-leaders in the morning wave.

“I definitely feel like I'm in there,” Wie said. “I think I held it together today. I had a lot of opportunities where I had to make big putts, and I'm proud of myself for that.”

Wie, playing through a left-hip injury that led to an overhaul of her swing the last six weeks, hit just seven of 14 fairways and 11 greens in regulation.

“Just a couple of shots here and there,” she said. “I couldn't get my irons as close as I wanted. Just couldn't get that going today. Made a lot of good par saves, kind of a mediocre round, but at the same time just a lot of good feelings. I'm excited about the rest of the tournament.”

Wie narrowed her stance to relieve stress on her hip. It’s changed the nature of her swing, including the rhythm. She’s wearing a brace on her left ankle, another joint stressed by her former swing.