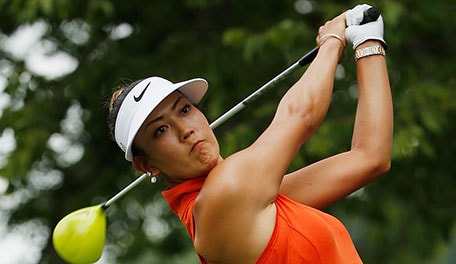 LANCASTER, Pa. – Michelle Wie tried to mount an early run Sunday to defend her U.S. Women’s Open title, but she fell short despite an admirable finish with her ailing left hip and leg appearing to worsen.

Wie sent a jolt through Lancaster Country Club driving the short par-4 16th hole, rattling her tee shot off the flagstick. She eagled the 235-yard hole and then birdied the last to shoot even-par 70, but she was limping hard on her way home.

“I’m just happy the round is over,” Wie said. “It was a tough one today. It was definitely one of the toughest rounds I’ve ever played.”

Wie was diagnosed with bursitis in her left hip seven weeks ago. She’s also struggling with pain in her left knee and left ankle, joints that have endured wear and tear as shock absorbers of her tightly wound swing. She has undergone one cortisone shot and two platelet-rich-plasma injects since the bursitis diagnosis. Doctors have told her the inflammation in her hip needs rest, but she has pushed through this major championship season.

“At this point, I think I have to look into it further,” Wie said. “It was getting a lot better, and it just kind of went backwards this week. I just want to have another look at it, see what my game plan is moving forward. I made it through today. If it wasn't for the crowds and the fans today, it definitely would have been tough, but they really pushed me forward and I'm really grateful for that.”