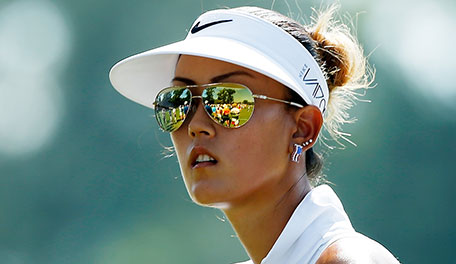 Michelle Wie is teeing it up at the Canadian Pacific Women’s Open this week in her first start since withdrawing from the Ricoh Women’s British Open after re-injuring her left ankle in a fall in the second round at Trump Turnberry three weeks ago.

Wie has been battling pain in her left hip, knee and ankle since the middle of May. She was diagnosed with bursitis in her hip late in the spring and most recently a bone spur in the foot. She played 18 holes in the pro-am Wednesday at Vancouver Golf Club without a limp.

Wie said she discarded the protective brace she’s been wearing on her left ankle.

“I took the brace off today, and hopefully I’ll keep it off the rest of the year,” she said.

Since hurting herself at Kingsmill, Wie has made six starts with two withdrawals and two missed cuts. She limped her way through her title defense at the U.S. Women’s Open, finishing  11th. That equaled her best finish this season. She’ll be looking to find her form with the Solheim Cup one month away. The American team will be decided with Sunday’s completion of the Canadian Pacific Women’s Open. Wie has already locked up a spot on the team.

U.S. Solheim Cup captain Juli Inkster has been in close communication with Wie.

“We’ve had a lot of discussions,” Inkster told Golf Channel’s Tom Abbott. “She’s going to be playing this week and see how it goes, but that’s a big question mark right there. I really need her to be 100 percent over there. She said she would be honest with me come Saturday and Sunday. That’s all I can ask.”