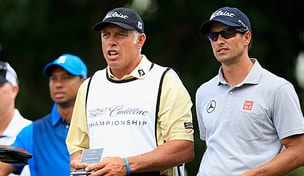 Getty Images
AUGUSTA, GEORGIA - APRIL 06: Justin Rose of England talks to his children Leo and Charlotte during the Par 3 Contest prior to the start of the 2016 Masters Tournament at Augusta National Golf Club on April 6, 2016 in Augusta, Georgia. (Photo by Harry How/Getty Images)  -

Apparently it's not over between Tiger and Stevie.

While they walked the fairways together in the same group for the first two rounds last week at Trump International Doral, the former player/caddie duo still has unfinished business, according to Williams.

"I haven't sorted anything out with him," Williams explained during an interview with Australia's Fox Sports. "There's been a lot of ... this, that and the other ... but the hatchet hasn't been buried."

Williams and Woods paired to win 13 majors from 1999-2008, though the Kiwi was abruptly fired during the summer of 2011 while Woods was battling injury. Williams has since looped full-time for Adam Scott, and guided the Aussie to a green jacket in April.

Williams offered comments last year that seemed to indicate the rift between the two was a thing of the past.

"There's an old saying that time heals all wounds," Williams said in August. "It's been a couple of years and, as I said, time has a way of healing."

His comments this week, though, paint a more unresolved picture.

"It's just personal things and a difference of opinions on how things went down," Williams said Tuesday. "I need to sort that out with him."

Just two days removed from the world No. 1 carding a final-round 78 and watching Patrick Reed - dressed in Woods' trademark red-and-black Sunday attire - triumph at Doral, Williams also shared his view that Woods' once-legendary intimidation factor over the field is not what it used to be.

"I always felt that was a big thing, that guys were intimidated by him," Williams said. "(But) there's no intimidation factor anymore, and that counts a lot."