Wind doesn't pose a threat to Kuchar in Rd. 2 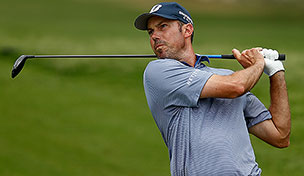 ST. SIMONS ISLAND, Ga. – Equipped with one of the lowest ball flights on the PGA Tour, Matt Kuchar would appear to be ideally suited to cope with windy conditions.

That theory proved true Friday, as the 35-year-old carded his second straight round of 2-under 68 despite blustery conditions at the McGladrey Classic.

“Today was really tough. The wind was steady at kind of 25 miles per hour,” explained Kuchar, who notched three birdies against just a single bogey Friday. “I feel like I’m pretty good at grinding out pars, and you’ve got to do a lot of that on days like this.”

At 4-under 136 through two rounds, Kuchar trailed by three shots upon signing his scorecard Friday. As a Sea Island resident, he was somewhat eager to see the wind kick up on the Seaside Course.

“There were a lot of locals that were hoping for some windy conditions to show Seaside’s real teeth,” explained Kuchar, who at No. 8 in the world is the highest-ranked player in this week’s field. “They’re out today.”

With wind gusts continuing to top 30 miles per hour along the Georgia coastline, Kuchar was clear about his post-round plans – or lack thereof.