Winds forecast to increase in final round of PGA 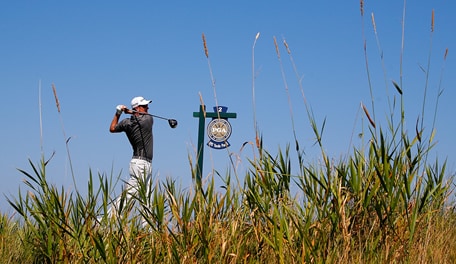 SHEBOYGAN, Wis. – Whistling Straits was a congenial host on Saturday. A look at the PGA Championship leaderboard shows a 64, three 65s, three more 66s and a host of 67s and 68s.

“I heard it's going to be windier tomorrow, that could be the factor that we struggle with,” Justin Rose said. “And that's going to allow the chasing pack to maybe have a better chance of making inroads into the lead.

“So we'll see what tomorrow brings.”

Winds are expected to be steady throughout the day at 10-15 miles per hour on Sunday with gusts up to 25 mph, a noticeable increase from Round 3 in which it ranged between four and seven miles per hour.

Rose was able to shoot 68 on Saturday to reach 12 under for the championship, three back of leader Jason Day. Even if the conditions do toughen in the final round, Rose believes he needs to match his most recent performance – at worst – in order to add to his major total.

“It's never easy to close out a major championship,” said Rose, the 2013 U.S. Open champion. “If I was to shoot 68 again, you never know. Obviously I would like to go lower than that, but that would be the high end of what I would be thinking.”