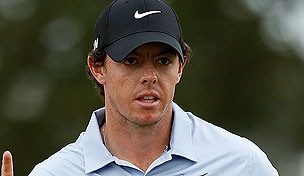 With Tiger Woods missing the Masters next week following successful back surgery, oddsmakers have tabbed Rory McIlroy as the favorite to take home the green jacket.

Entering this week, many shops had Woods, McIlroy and Adam Scott as nearly equal co-favorites. With Woods now out of the field for the first time since 1994, McIlroy's odds were trimmed from 10/1 to 8/1 at the LVH Hotel & Casino in Las Vegas. Scott, meanwhile, remained at 10/1 and is now joined at those odds by Jason Day, who hasn't teed it up since winning the WGC-Accenture Match Play Championship in February.

Skybet, which operates out of the U.K., now lists McIlroy as a 7/1 favorite, followed by Scott at 9/1 and Phil Mickelson at 14/1. Here's a look at the revised odds for some of the Masters favorites following Woods' withdrawal:

A Florida man has filed a lawsuit against Tiger Woods and his caddie, claiming he suffered injuries from the caddie pushing him out of the way. 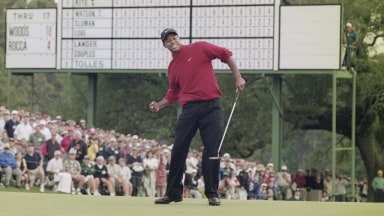 Tiger Woods burst onto the scene as a 21-year-old at the 1997 Masters Tournament with a commanding 12-shot win. We're re-tracking his first major victory.