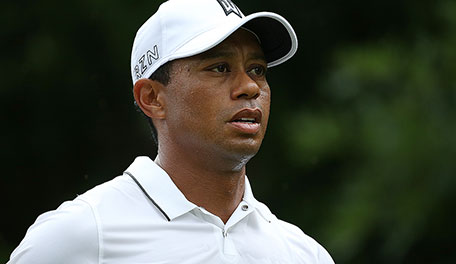 AKRON, Ohio – In pictures around Firestone Country Club and on the list of recent tournament champions, it’s hard to miss Tiger Woods at the WGC-Bridgestone Invitational.

Except, that’s the only place you’ll see him this week. Despite winning the tournament eight times between 2000-2013, Woods did not qualify this year and will miss the event for just the second time since 1997.

According to world No. 2 Jordan Spieth, Woods’ absence stands out given his track record in Akron.

“I’m surprised, given WGC has more impact on world ranking, has more impact on FedEx Cup, has more impact in general, that there isn’t some form of a category like there is for majors,” Spieth said. “Not even just that it’s this one specifically, but if you win a certain amount of them or whatever – I mean, I don’t know how they’d do it, but I think that it is a bit surprising.”

Woods has won a total of 18 WGC events, while Geoff Ogilvy (three) is the only other player with more than two such wins to his credit. While major championships reward past winners with invites for several subsequent years, WGC events have no such criteria. This week’s 77-man field is made up largely of tournament winners from the past 12 months and players ranked inside the top 50 in the Official World Golf Ranking, where Woods is currently No. 262.

Spieth was not the only player to speak out on Woods’ behalf, as the sentiment was also echoed Tuesday by Jason Day.

“You win the bloody tournament eight times, you probably should (get an exemption),” Day said. “It’s tough, though. It’s something that, for us as players, we have to earn our spots in these tournaments. Unfortunately, right now, he’s going through a spell where he’s not playing that great.”