Woods back in contention at Quicken Loans 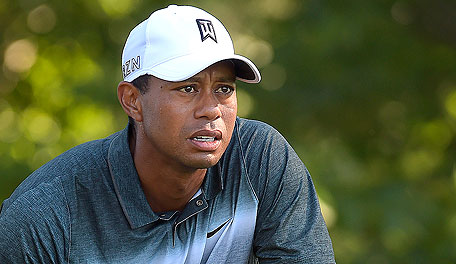 GAINESVILLE, Va. – The tournament host put on quite a show Friday at the Quicken Loans National, and for now Tiger Woods is back to where he used to be – near the top of the leaderboard.

Woods took advantage of an early tee time, smooth greens and some momentum from an opening 68, and carded a 5-under 66 to sit at 8 under par. When Woods finished just after 1 p.m. ET he was only one off the lead.

"Overall, I hit the ball really well today," Woods said after making six birdies and one bogey. "I was very pleased with that and made a few putts, but also I missed a bunch, too. This could have been one of those really low rounds ... I'm in a good spot heading into the weekend."

Woods has been searching all year to regain his form, and after some flashes of good play at the Masters and The Greenbrier, he seems to have finally turned a corner at Robert Trent Jones Golf Club.

"People want the immediate fix, the one tip that's going to work for the rest of their life," Woods said. "It doesn't work that way. Takes time to build it."

The swing Woods has been building with instructor Chris Como has come under intense scrutiny, and despite rumors the pair were heading toward a breakup, Como was spotted Friday morning observing his star pupil warming up on the range.

Woods started on the back nine just after 8 a.m. and got off to a smooth start with four straight pars, something he's been unable to do in just about every round he's played this year. He almost came undone with a terrible drive at the par-5 14th that didn't even make the fairway. It led to his only bogey of the day, but Woods said the awful shot was actually the key to his round.

From there it was vintage Tiger. Massive drives of more than 310 yards, plenty of club twirls and leg kicks, and he even dusted off the fist pump after he drained a 36-foot putt for birdie on No. 8.

"I putted pretty aggressively," Woods said. "I have felt very comforable with my stroke."

Woods passed an important test Friday – following up a low round with another one – and now he'll have a late tee time Saturday to see if he can put himself into position for win No. 80 on Sunday.

"I'm looking forward to getting after it," he said.