Woods back at Greenbrier after Bahamas vacation 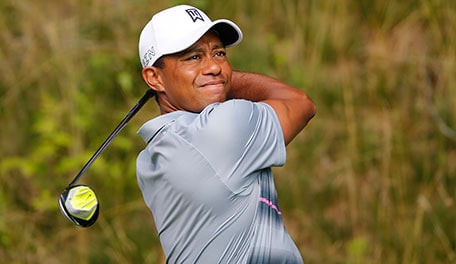 WHITE SULPHUR SPRINGS, W. Va. – What’s the best cure for a missed cut at a major? For Tiger Woods, it’s a family vacation to the Bahamas.

Woods made an early exit from the U.S. Open at Chambers Bay after rounds of 80-76, just the second time he has missed the cut in that event as a professional. Left with some extra time off in advance of this week’s Greenbrier Classic, he booked a quick trip to the Caribbean.

“Took my kids down to Albany and we were down diving in the water every day, all day pretty much,” Woods said. “Had a nice family vacation down there. It was nice to have a summer break with them like that, especially after the way I played. It was nice to get away from golf for a while and just be with my kids.”

Woods said he didn’t touch a club “for a while” after Chambers Bay, trading in his time on the range for some time snorkeling in the ocean. He pointed out that throughout his nearly 20-year career, taking short hiatuses have offered mixed results.

Woods now returns to The Greenbrier for the first time since 2012. With a forecast calling for soft conditions throughout the week, he expects that plenty of birdies will be required in order to avoid back-to-back missed cuts, both at this event and overall.

“We’re going to have to go low,” he said. “Just keep the pedal down and be aggressive. Just the way it’s going to work out this week.”