Woods better, but no match for McIlroy in Round 1 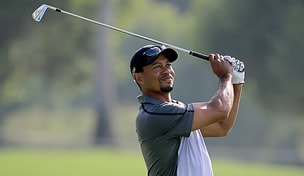 DUBAI, United Arab Emirates – By comparison, Tiger Woods’ first-round 68 was a dramatic improvement over his last competitive round at Torrey Pines, it just appeared something less than it actually was when compared to Rory McIlroy’s 63 on Day 1 at the Dubai Desert Classic.

Woods, who played with McIlroy on Thursday, continued to struggle with his driver – hitting just 7 of 14 fairways – but put on a short-game clinic that included 25 putts.

“I probably could have gotten a couple more out of it,” Woods said. “But I missed them all on the short side, even last week I missed my shots in the right spots.”

Woods, who teed off on the 10th hole, got off to a fast start with a birdie at his first hole and was temporarily tied for the lead when he rolled in a 20-footer for birdie at the 15th hole to move to 3 under.

The world No. 1 played the rest of the way in 1 under par, which was progress by any measure when compared to his third-round 79 last week at Torrey Pines that led to his first missed 54-hole cut on the PGA Tour. The only problem was McIlroy was picking the Emirates Golf Course apart like he was playing the Humana Challenge.

McIlroy eagled the third hole, his 12th of the day, to move to 8 under and finished at 9 under par to move atop the leaderboard and into a two-stroke lead.

Still, Woods was pleased with his bogey-free performance and was tied for fifth place when he completed his round and headed to the practice tee for some overtime.

“These greens are a lot more grainy,” Woods said. “They’re fast, but they are grainy without the over-seed.”

Woods, McIlroy and Stephen Gallacher (66), the third member of Thursday’s marquee group, tee off at 3:25 p.m. ET on Friday.