Woods gets chance to measure herself against Lewis 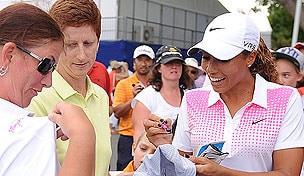 Getty Images
Jonathan Randolph tosses a ball before his tee shot on the first hole during Round Three of the AT&T Byron Nelson at the TPC Four Seasons Resort Las Colinas on May 30, 2015 in Irving, Texas. (Photo by Tom Pennington/Getty Images)  -

Cheyenne Woods will get a chance to measure herself against the best American in the game in Sunday’s final round of the Women’s Australian Open at Victoria Golf Club.

Woods is paired with Stacy Lewis, who as Rolex world No. 3 is the highest ranked American in the world. Woods, 23, is coming off a victory at the Aussie Ladies Masters last week, her first on a major women’s tour. Lewis, 28, has won eight LPGA titles, two of them major championships.

After opening with a sluggish 74 this week, Woods bounced back with a 65 in the second round and a 71 in the third round. Woods and Lewis will both start the final round tied for 23rd at 6-under overall, seven shots behind Chella Choi, the leader.