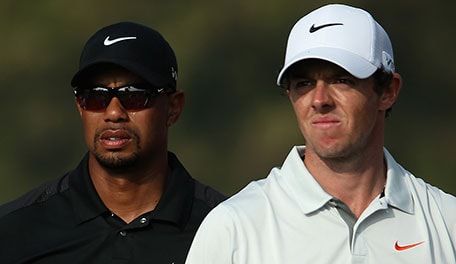 World No. 1 Rory McIlroy is down with an ankle injury, and the often-injured Tiger Woods knows how he feels.

So it's no surprise, according to USA Today, that McIlroy asked for Woods's advice shortly after last year's Open champion injured his left ankle last week playing soccer with friends.

"He sent me a photo the day he did it. We talked about it for a little bit," Woods told USA Today and ESPN.com on Saturday after practicing at St. Andrews. "He said, 'You've been through a lot of injuries over the years,' so he picked my brain a little bit. We had a good talk. He's doing the right thing, taking care of his body first before he gets back out here."

It's unknown when, or if, McIlroy will return this season, and the injury couldn't have come at a worst time. St. Andrews sets up perfectly for McIlroy's game (he shot 63 at the Old Course in 2010), he's also the defending champion at Firestone and the PGA Championship. And with the way Masters and U.S. Open champion Jordan Spieth is playing, McIlroy will likely lose his No. 1 ranking while sitting on the couch.

Woods agreed with other players that despite the injury, McIlroy can't live his life in a bubble.

"I've skied a lot," Woods told USA Today. "I like adrenaline. I like feeling that rush. That's why I love spear fishing, free diving. It's so peaceful down there. But there is inherent risk in all of that. But you can't live in a box."