Woods 'grinds' his way into the weekend at Honda 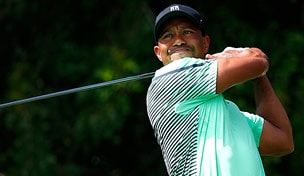 Woods struggled with accuracy for much of the afternoon at PGA National, ultimately firing a 1-under 69 on the Champion Course. At even-par 140, he will survive the 36-hole cut on the number.

“It was a grind, there’s no doubt about it,” said Woods, who carded three birdies and two bogeys. “I didn’t hit it very good. Just one of those days where I fought out a number.”

The round marks the first time Woods has broken par at PGA National in his last six tries, dating back to a final-round 62 in 2012. Despite shooting in the 60s, Woods finds himself 11 shots behind leader Rory McIlroy.

Woods, however, still envisions a scenario in which he could contend come Sunday afternoon.

“Wind is supposed to blow 10-20 (miles per hour) tomorrow, so anything could happen this weekend,” he noted. “Maybe I can go post a number tomorrow.”

Woods continues to struggle out of the gates in 2014. He hit just nine of 18 greens in regulation Friday, as his mid-range approach shots consistently failed to get close to the target.

His lone back-nine birdie came courtesy of a chip-in at No. 13, a shot that was necessitated after Woods failed to find the green from 119 yards in the middle of the fairway.

“I had a couple loose iron shots coming in, and it was just a grind,” Woods said.

After struggling with the pace for much of his opening round, Woods made some improvements on the greens. He required only 25 putts – largely a product of his GIR inefficiency, and helped by the chip-in at No. 13 – but after the round he cited it as a lone bright spot during a mediocre afternoon.

“I made a lot of putts, which was nice. The putts that I hit, they had the right speed on them,” he said. “I had a good feel for them today.”