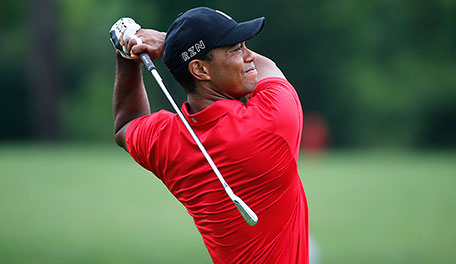 The PGA Tour heads to Gainesville, Va., this week for the Quicken Loans National. Here are three groups to watch at Robert Trent Jones Golf Club:

Fowler has been streaky over the past few months, winning twice, missing the cut twice and finishing 30th twice. Hahn didn’t fare well in his immediate starts following his surprising victory at Riviera, but he has a pair of top-11s in his last three starts, including last week in Canada. Crane, meanwhile, is searching for his first top-30 in a full-field event this season.

A trio of former champions. Woods will garner even more attention than usual this week as the tournament host. His T-32 at The Greenbrier is the only bright spot in a recent slate that includes a pair of missed cuts (both Opens), a last-place showing (Memorial) and a T-69 (Players). Haas, who won in 2013 at Congressional, has missed his last three cuts, while 2011 champion Watney, after a strong West Coast swing, has only one top-10 in his last 14 starts.

Rose, the defending champion (at Congressional), is a popular pick to win. He is coming off a T-6 at The Open, his second top-10 finish in his last four starts. Walker is one of five players with multiple Tour wins this season, but he has only one top-30 finish in his last eight worldwide events. Lingmerth, who won earlier this season at the Memorial, also added a T-6 at The Greenbrier.