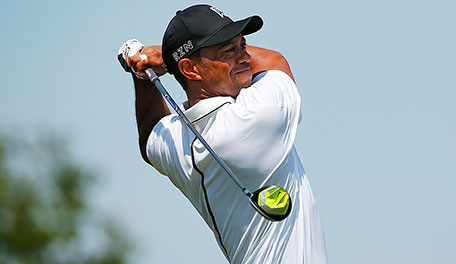 The PGA Tour heads to Greensboro, N.C., this week for the Wyndham Championship, the final regular-season event of the 2014-15 season. Here are four featured groups to watch at Sedgefield Country Club (all times ET):

Woods will be the big draw this week as he makes a surprise appearance in Greensboro for his first start in this event. Needing a win to make the postseason, he'll play the first two rounds alongside Koepka, who just finished T-5 at the PGA Championship, and Matsuyama, who rattled off 10 straight top-25 finishes earlier this season. Matsuyama finished 15th at Sedgefield back in 2013, while Koepka was T-38 last year but closed with a final-round 64.

This trio consists of Haas, a local product and fan favorite, and a pair of surprising bubble boys. Haas came up one shot short last year but has three straight top-20 finishes at Sedgefield, while Kaymer tied for 20th in his tournament debut in 2013. He'll need a better result this time around to make the playoffs, as the German is currently 149th in the FedEx Cup points race. Schwartzel rounds out the group, but enters this week in the precarious position of No. 125 in the standings.

The reigning FedEx Cup champ has quietly started to heat up, as Horschel has seven top-25 finishes in his last nine starts. He'll be joined by Scott, who surprisingly missed the cut last week at Whistling Straits and is making his first start in Greensboro since 2009. Donald is the third member of the group, and like Schwartzel he needs a strong result to clinch a playoff spot as the Englishman is currently No. 124 in FedEx Cup points.

This group consists of three past champions, as Snedeker (2007) and Simpson (2011) both notched their first wins at this event while Villegas rallied to lift the Sam Snead Cup a year ago. Snedeker continues to have a strong summer after a T-12 finish at the PGA, while Simpson's past track record at Sedgefield includes five straight top-25 finishes. Villegas is again in need of a big week in the regular-season finale, as he is No. 129 in points as he begins his title defense.