Woods improves driving, but only manages 2-under 70 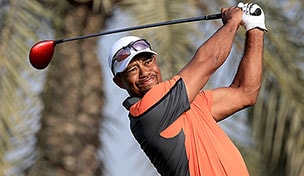 Getty Images
Phil Mickelson of the United States walks on the 15th hole during the third round of the 2015 Masters Tournament at Augusta National Golf Club on April 11, 2015 in Augusta, Georgia. (Photo by Ezra Shaw/Getty Images)  -

DUBAI, United Arab Emirates – Tiger Woods needed something in the mid-60s on Saturday at the Dubai Desert Classic, but he settled for a 2-under 70.

It won’t get the world No. 1 back in the hunt for this week’s title, but following his driving struggles over the first two days he embraced Round 3 as a step in the right directon.

“I wasted a lot of opportunities out there today,” said Woods, who will begin the final round at 5 under par, which was six shots off the lead when he left the golf course.

“Today was an easy day for me to get to 10 (under). I only hit a couple bad shots and missed a ton of putts. But I really hit it good. Just threw away a lot of shots.”

Woods hit 7 of 14 fairways on Saturday, compared to an anemic 4 of 14 on Friday. He also hit 13 of 18 greens in regulation, including every putting surface on his closing nine. His comeback, however, was stalled on the greens on his way to a 29-putt day.

But it could have been worse.

After chipping in for par at the first hole, Woods severely miss-hit his second shot at the par-5 third into the desert and made bogey. But he rallied with textbook birdies at the eighth, 10th and 12th holes.

Woods missed opportunities on his final two holes, a 5 footer for birdie at the 17th hole and a three-putt from 35 feet at the par-5 finishing hole for a par.

“My grip got a little off. It’s something that’s very simple. A really easy fix,” he said. “It’s one of my old habits. I tend to get back into that old pattern.”

Woods, who plans to fly to India on Monday for a corporate outing, did not go to the range after his round.