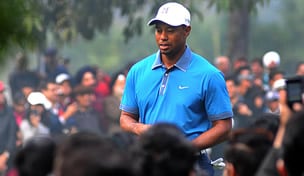 After a tie for 41st earlier this month at the Omega Dubai Desert Classic, world No. 1 Tiger Woods made a quick detour for an 18-hole exhibition in Delhi, India - his first trip to the nation of more than 1.2 billion people.

While several of India's top golfers joined Woods for a few holes during the outing, the 14-time major winner played the round as the guest of Pawan Munjal, CEO of Hero Motorcorp. Several days removed from the trip, Woods remained impressed by the unexpectedly high turnout of fans at Delhi Golf Club.

"The people were so excited; they came out in droves," he detailed in an interview with ESPN.com. "We had a bunch of fun, thousands of people out there. It was supposed to be a private deal but it got to be a lot more than that. I played well and everyone just loved it."

Woods had a few reasons to feel rosy about his maiden voyage to the land of Arjun Atwal and Jeev Milkha Singh. First, he received a hefty appearance fee for the exhibition, one which Indian media outlets reportedly estimated to be in excess of $2 million.

Woods also left smiling because of his strong play. After struggling to shake off rust in his first two competitive starts, the 38-year-old made 10 birdies in his first 15 holes in India - a far cry from the form that caused him to miss the 54-hole cut two weeks prior at Torrey Pines. Woods explained that he used the exhibition to build upon momentum garnered from his closing 71 in Dubai.

"I knew eventually it would kick in. Unfortunately, it took me six rounds before it kicked in," he added. "I was very pleased with it on Sunday at Dubai and then India on Tuesday. It was merely a continuation of that. I put it together."