Woods: 'It's not the way I'm used to starting' 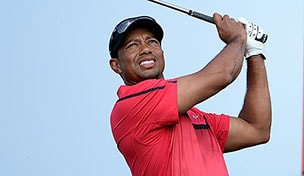 After getting off to the slowest start of his professional career, Tiger Woods remains focused on claiming major No. 15 at Augusta National this spring.

He admitted this week, though, that the things haven't gone exactly as planned to begin the year.

"It's not the way I'm used to starting," Woods explained in an interview with ESPN.com.

After a third-round 79 left him on the wrong side of the 54-hole cut at the Farmers Insurance Open, Woods headed halfway around the world to the Omega Dubai Desert Classic, where he tied for 41st. While his finish in the desert was disappointing, Woods left Dubai encouraged by his final-round performance, noting that it took some time to shake off rust following a six-week offseason that included little golf.

"I took a lot of time off this winter to get ready for the season because it's going to be a long grind," said Woods, who shot a 1-under 71 in his final round in Dubai. "It took three rounds in San Diego and three rounds in Dubai before it finally clicked in. My golf feels (like it) finally came back. Whatever shot I saw, I hit. Whatever number was given to me by Joey (LaCava), I hit. I had a wonderful feel for it."

With his decision to opt out of next week's WGC-Accenture Match Play Championship, Woods now has a trio of starts remaining before he heads down Magnolia Lane: the Honda Classic in two weeks' time; followed by the WGC-Cadillac Championship and the Arnold Palmer Invitational, two events that Woods won in resounding fashion a year ago.

He emphasized that the ultimate focus over the next month will be on preparing for the Masters, perhaps even moreso than attempting to climb the leaderboards in Florida.