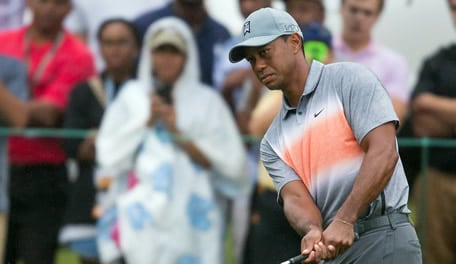 GREENSBORO, N.C. – Tiger Woods is making his first appearance at the Wyndham Championship, and, sure, there is the obvious reason why – it's a last-ditch effort to get into the first event of the FedEx Cup Playoffs, which begins next week at The Barclays in Edison, N.J. Woods needs a win or possibly a solo second to punch a ticket to Plainfield C.C.

But Woods said the decision ultimately came down to his health.

"I just wanted to see, first of all, how my body was going to be feeling," Woods said after 18 holes at a soggy Sedgefield C.C. "After grinding it out trying to play Whistling Straits, practicing, to see how everything felt if I was ready to go, and then make a push to try and get in the playoffs."

Woods also wanted to make sure he didn't miss important moments with his kids.

"I had a soccer game to go to, I had to take my kids to school for the first day of school," he said. "I didn't want to miss any of those. Those are more important than any golf tournament."

With the exception of his glutes not firing at Torrey Pines, Woods has been healthy for most of the season. He only played seven events last year after having back surgery in March of 2014. He wasn't able to qualify for the playoffs, and he's now facing the same dilemma, except Woods is on the outside looking in because of poor play and not his health.

"I need to get more consistent with everything and start stringing together not just holes, not just rounds but tournaments," Woods said. "That's why this tournament is important to me; hopefully I can win and get in the playoffs and start playing a bunch of golf.

"If not then I got a big break and some overseas stuff to do later in the year."