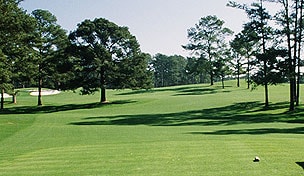 Getty Images
OAKVILLE, ON - JULY 25: Tony Finau walks on the tenth hole during round three of the RBC Canadian Open at Glen Abbey Golf Club on July 25, 2015 in Oakville, Canada. (Photo by Minas Panagiotakis/Getty Images)  -

PALM BEACH GARDENS, Fla. - Tiger Woods might not have the fondest memories of the Eisenhower Tree at Augusta National - it was beneath its branches, after all, that Woods took a swing that ultimately sidelined him for much of the 2011 season.

Nevertheless, the four-time Masters champ added his name Wednesday to the list of those mourning the loss of the famed pine, which was damaged and ultimately removed two weeks ago following an ice storm.

"I've hit it a few times. I can't say that I haven't it," Woods said of the tree that formerly towered 65 feet above the 17th fairway. "It's like the cypress tree out there at Pebble, kind of that iconic landmark. I can't say some of the guys are going to miss it, but we are going to certainly see a difference, there's no doubt about that."

With three wins in 21 career starts at Augusta National, Phil Mickelson certainly has had his fair share of experience with one of golf's most notable trees. While he explained that he was sad to lose "such a historical piece of the property," he also offered a more tempered view of the how the hole called "Nandina" will play in the wake of its removal.

"From an architectural point of view, you never build a hole around a tree because of the possibility that you might always lose it," said Mickelson. "The way (No.) 17 plays, it really won't be much different. It might be replaced somewhere down the line, if it hasn't been already, but it doesn't really affect the way the hole plays."