Woods to miss fifth major because of injury 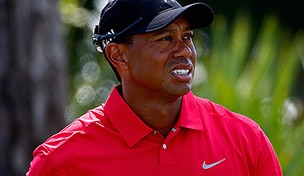 The Masters will be played this year without Tiger Woods for the first time since 1994.

The world No. 1 announced Tuesday that he underwent surgery for a pinched nerve in his back and will skip the year’s first major for the first time in his pro career.

Woods, 38, has now completed the Injury Grand Slam, missing all four major championships at some point in his career. He has missed five of the past 23 majors because of injury.

Woods was forced to sit out the British Open and PGA Championship in 2008 after recovering from reconstructive surgery on his left knee.

He also skipped the U.S. Open and British Open in 2011 after sustaining injuries to his knee and Achilles’ tendon while hitting a shot from an awkward stance at Augusta.

Woods had played the Masters each year since 1995, winning four times and finishing in the top 6 in seven of his past eight appearances.

Woods first showed signs of back pain at the 2012 Barclays, and he grabbed his back during last year’s PGA Championship.

Two weeks later, he hit a shot in the final round of the Barclays and dropped to his knees in pain. He played the next three events in the FedEx Cup, and then the Turkish Airlines Open and his own World Challenge, but he hasn’t finished better than T-25 (with one WD) in four worldwide starts this calendar year.