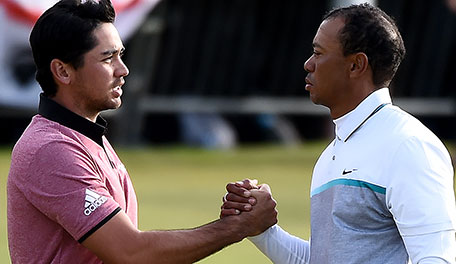 SHEBOYGAN, Wis. – Jason Day said a lot of people along the way helped him win the PGA Championship.

Day and Woods have become friends and play a lot of practice rounds together. Day’s wife, Ellie, says her husband loves to ask questions, to learn what he can from mentors. And he hasn’t been afraid to pick Woods’ brain.

“He texts Tiger all the time,” Ellie said.

Day’s coach and caddie, Colin Swatton, said any advice Woods has passed on to Day is between those two, but he acknowledged Woods’ friendship has been an immense help to Day.

“I can say definitely Tiger has been a help in allowing Jason to get better,” Swatton said.

Day has also learned a lot from Norman.

“Every time that I'm in a major championship, every time that I play in a PGA Tour event where I’m close and I don't finish, Greg is there to send me a text and say, `Don't worry about it. You're going to have plenty of these. Keep your head up. Keep moving forward. Don't stop fighting. Stuff like that.”