Woods one back at Turkish Airlines Open 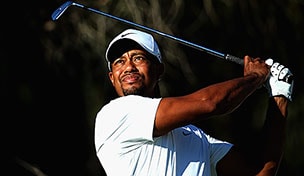 Tiger Woods put a jolt into the Turkish Airlines Open on Friday, but he isn’t the only good storyline going into the weekend. Here’s an overview of what’s happening in Turkey:

What it means: A big weekend sets up with Stenson moving into position to build on his bid to become the first player to win the FedEx Cup and the Race to Dubai in the same season. Stenson leads the Race to Dubai standings, but Poulter is pressing him in this third leg of The Final Series. Poulter is fourth in the standings. Factor in the second-round charge world No. 1 Tiger Woods made, and this becomes quite the attractive leaderboard.

Round of the day: With nine birdies and no bogeys, Woods’ 9-under-par 63 moved him into position to win his sixth title this year.

Best of the rest: Lee Westwood and Justin Rose both shot 66 Friday to move within four shots of the lead. Westwood is looking for his first victory this season. Rose, of course, won the U.S. Open back in June and is third in the Race to Dubai standings.

Biggest disappointment: After opening with a 66, Paul Casey struggled to a 73 on Friday. His last two victories have come on courses designed by Colin Montgomerie, and The Montgomerie Maxx Royal, host to this event, is a Montgomerie design.

Biggest storyline: Stenson’s attempt to win the Race to Dubai after winning the FedEx Cup is a big deal, but Woods overshadows everyone when he’s in contention and often when he isn’t. With Woods a factor, there will be more eyeballs aimed at the tournament telecast and at European Tour leaderboards than there would otherwise be this weekend.