Woods opens with 6-under 64 at Wyndham 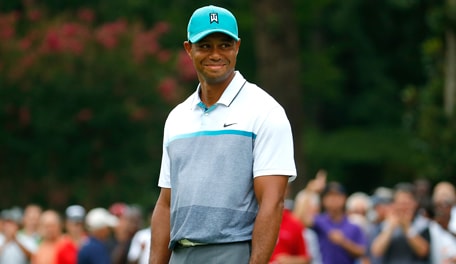 GREENSBORO, N.C. – Tiger Woods' opening round at the Wyndham Championship started with a bang and he kept it going for a 6-under 64.

It marked Woods' lowest round of the year and his best aggregate score since a 61 in the second round of the 2013 WGC-Bridgestone Invitational. Woods – who likely needs a win to get into next week's Barclays, the first event of the FedEx Cup Playoffs – was two strokes behind leader William McGirt when he finished just after noon on an overcast and humid day at Sedgefield C.C.

"I felt very good out there today," Woods said. "Hit a lot of good iron shots, made some decent putts ... I finally got something out of my round."

His round started with another poor tee shot left of the fairway, and he couldn't find the green on his approach. But Woods drew a good lie, hit a big flop shot and walked after it as his ball dropped in the hole for a thunderous birdie.

"I got lucky, I drew a good lie," Woods said. "It was sitting up. The greens are soft, so I went for the shot."

He gave it right back on No. 11, his second hole of the day, with a chunked pitch shot, but he played solid golf the rest of the way, closing with six birdies and no bogeys. Woods's only real blemish coming in was a 5-footer for birdie that spun around the hole at the par-4 sixth.

He closed by curling in an 11-foot par putt on No. 9 that drew a loud roar from the packed house around the green, and a mini fist pump from Woods.

"It's nice to make birdie putts, but I think those par putts are probably – I feel more energetic when I make those putts than I do birdie," Woods said.