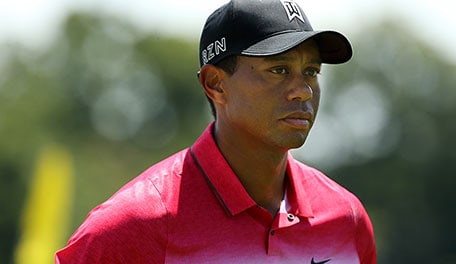 Tiger Woods is waiting to see how he fares at next week’s PGA Championship before deciding whether to make any late-season schedule changes.

Speaking Monday during the Deutsche Bank Championship media day, Woods said, “Playing well in the PGA, that determines whether or not I play Wyndham (Championship) and obviously the rest of the FedEx Cup playoffs.”

Woods and the other PGA participants have until 30 minutes after their second round (Aug. 14) to commit to the Wyndham.

Last week, Woods, who is currently 185th in FedEx Cup points, left open the possibility of adding Greensboro – an event he has never played as a pro – in an 11th-hour attempt to make the postseason. Wyndham tournament director Mark Brazil told GolfChannel.com that he spoke with Woods' agent, Mark Steinberg, last month. He said during the event’s media day Monday that “we don’t have an idea of what he’s going to do, but we’re in a good spot.”

Without adding an event, Woods would need to finish first or second at the PGA to crack the top 125 and qualify for the postseason.

To play the Deutsche Bank – an event that he hosts, and his foundation runs – Woods would need to be in the top 100.

“I’ll be there,” he said. “I have my normal duties as tournament host, and my foundation runs the event. Hopefully I can get off my butt and get into the top 100 and play the event.”