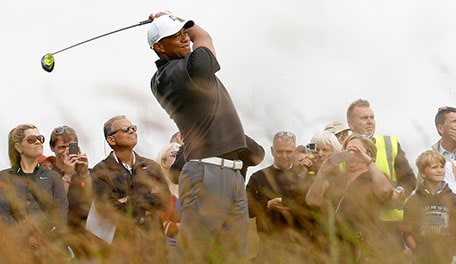 Tiger Woods certainly knows his way around the Old Course, but that didn't stop him from getting in some early practice in advance of next week's Open Championship at St. Andrews.

Woods arrived Saturday to St. Andrews, where he won the claret jug in 2000 and 2005, and played holes 16, 17 and 18 with five lucky junior golfers for a Nike training camp, according to Golf Channel's Todd Lewis.

Even though he only played three holes, Woods learned a lot about the conditions.

"I was shocked," Woods told to ESPN.com. "I had seen photos of it a month ago. It was bone dry. It looked like it was going to be one of those dust bowls again; hard, fast, like the years I've played St. Andrews. It's changed. They got big rain and a lot of sun. It's totally changed.

"I'm going to have to do a little bit of feel around the greens, my putting. I wasn't expecting the firmness to be that soft. We made ball marks on the greens. I don't ever remember making ball marks around this place."

Woods doesn't expect the Old Course to get any firmer as rain and cool temperatures are in the forecast all next week.

The 14-time major champion is coming off a T-32 finish last week at the Greenbrier Classic, where he shot three rounds in the 60s and showed much improvement in his ballstriking after struggling for much of the season.

Experience of a lifetime for 5 junior golfers at @NikeGolf training camp led by Tiger Woods on the Old Course. pic.twitter.com/ZGxjQrGVz6