Woods: Preparation will be key to Spieth's success

ST. ANDREWS, Scotland – Tiger Woods is the only player in the Open field who can relate to what Jordan Spieth is going through this week on the Old Course.

In 2002, Woods arrived at Muirfield with victories in the first two majors of the year and trailed by only two shots heading into the weekend. That's when he got caught in the worst of the conditions, battling fierce winds and driving rain en route to a third-round 81 – the worst score of his pro career until this season.

“Just happened to catch it at the wrong time,” he said, and though Woods came back with a closing 65 to salvage a T-28 finish at the Open, his chance to become the first player to complete the modern Grand Slam was lost in a matter of hours.

Will Spieth, fresh off a playoff victory at the John Deere Classic, suffer the same fate as Woods? We’ll find out this week, though it’s worth noting that the forecast for the second and third rounds is dodgy, at best.

“That’s what he talks about a lot is formulating a game plan and executing it, and this is a golf course in which you have to do that. You have to execute it and trust it and be a very good lag putter.”

For what it’s worth, Spieth is one of the best in that category – he’s ninth on Tour in three-putt avoidance.

Woods, a two-time winner on the Old Course, said that these next few days are crucial for Spieth, whose only experience at St. Andrews came during a friendly round in 2011 with his U.S. Walker Cup teammates. Seeing the course in varying wind conditions – primarily it’s out of the west or southwest; on Monday, it blew out of the north – is one of the keys to proper preparation here because it changes the lines off the tee and what trouble comes into play. 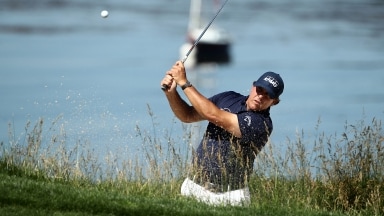 Phil Mickelson is back at Pebble Beach for the U.S. Open, where he's finished runner-up a record six times. He'll try yet again to snag the event that's eluded him the most, and claim the career Grand Slam. 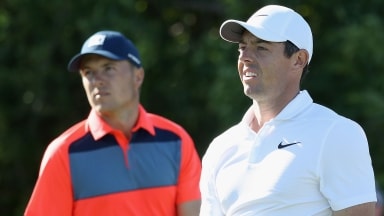 Rory to Spieth: Treat PGA week like any other

Rory McIlroy had some advice for Jordan Spieth – you know, from one guy searching for the career Grand Slam to another. 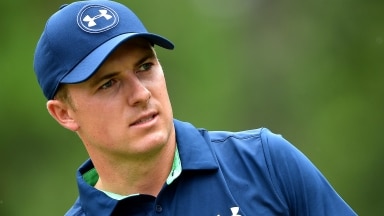 Spieth accepts that Grand Slam is off the table

Jordan Spieth will begin the weekend 11 shots off the lead and has all but given up on completing the Grand Slam this week.