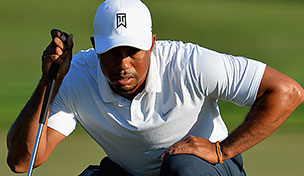 PALM BEACH GARDENS, Fla. – Earlier this week, Tiger Woods admitted that he was having a tough time getting a feel for the greens at PGA National.

He was dialed in on Saturday morning.

Woods holed putt after putt during the third round of the Honda Classic, carding a 5-under 65 on a course that has vexed him for much of the past two years.

“Today was a positive day,” Woods said. “I hit the ball well, made some putts and got myself back in the hunt.”

He improved his tee-to-green play Saturday, but it was Woods' hot putter that helped him make up ground. He took just 23 putts – chipping in for birdie for the second day in a row – and made seven birdies in total.

After a birdie on No. 1, Woods dropped a 37-foot putt for birdie at No. 5. Two holes later he made a 25-footer for another birdie.

Woods made a total of five putts over 15 feet, adding a chip-in from nearly 20 yards at No. 11 that trickled down the tier and found the hole.

“I just felt like I had a good feel today,” Woods said. “I played the par 3s in 3 under today, which was pretty nice.”

Woods' Saturday 65 is the second-lowest score he has carded in 11 competitive rounds on the Champion Course. He is seven shots back of 54-hole leader Rory McIlroy heading into Sunday.

While Woods made up ground, he also missed a handful of birdie chances from close range. On the third hole, his putt from inside five feet failed to touch the cup, and Woods was inside 17 feet for birdie on each of the last three holes but was unable to convert any of those oppotunities.

“The last couple holes, it would have been nice to get one of those,” Woods said. “Five (under) is still in the ballgame, but as I said it depends on what the leaders do this afternoon.”

Woods continued to struggle off the tee Saturday, finding just six of 14 fairways. However his approaches to the green saw a marked improvement. Woods afforded himself birdie putts of less than 20 feet on each of the closing six holes.

“This wind is something else,” he said. “It’s blowing out there, and it’s tough to get the right number.”

Following a MDF at the Farmers Insurance Open, and a lackluster T-41 in Dubai, Woods’ sluggish start has been the object of unending analysis. Saturday was the first time this year that Woods showed signs of the form that made him the Player of the Year in 2013. After the round he took a philosophical approach to his recent struggles.