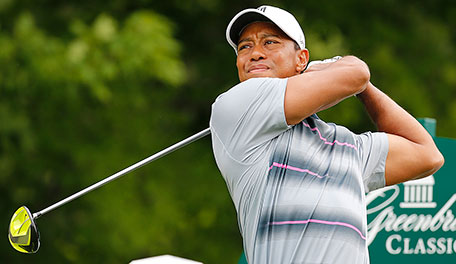 WHITE SULPHUR SPRINGS, W. Va. – Jordan Spieth is set to make his first start as a two-time major champion next week, although his decision to do so at the John Deere Classic – rather than at the Aberdeen Asset Management Scottish Open – has led to plenty of second-guessing.

Spieth plans to return to the Deere, an event that offered him a sponsor invite in 2012 and where he earned his first PGA Tour victory in 2013. He has taken the cross-continental charter from Silvis, Ill., to the U.K. for the Open Championship each of the past two years, but some believe that Spieth’s loyalty to the tournament should take a backseat to a more earnest focus on trying to complete the single-season Grand Slam.

Tiger Woods was the last man in Spieth’s current position, and he supports the 21-year-old’s decision to tee it up at TPC Deere Run.

“I think it’s great for him to play, get the playing feels, keep the playing feels going,” Woods said Wednesday at The Greenbrier Classic. “Whether you’re playing here or overseas, doesn’t really matter, (as) long as you have your feels. Feels travel.”

Woods won the first two majors of 2002 before heading to the Open Championship at Muirfield. He opted not to play between the two majors that summer, but his bid for the claret jug was derailed by a third-round 81 amid terrible weather conditions. He finished T-28.

While some pundits have called for Spieth to spend more time practicing on links-style courses in preparation for St. Andrews, Woods pointed to Spieth’s recent U.S. Open win as proof of his adaptability.

“I think he’s played enough links-type golf courses. He did all right at Chambers (Bay),” Woods said. “He’s played the British Opens before. St. Andrews will be a little bit different, there will be a lot to learn in a short time. But he’s young, and he can spend the energy playing 18 holes every day and be fine.”