World No. 1 would be 'dream come true' for Scott 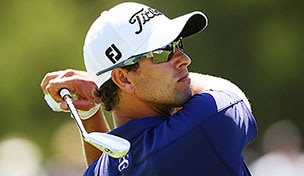 DORAL, Fla. – Don't underestimate the importance that potentially becoming world No. 1 will have on Adam Scott this week and beyond.

Early estimates show that if Scott wins the WGC-Cadillac Championship and current No. 1 Tiger Woods finishes outside the top five, the reigning Masters champion will take over the top spot for the first time in his career.

“I've said the whole time, I wouldn't really think about it when it came to this and it's impossible not to think about it,” Scott admitted during a Wednesday news conference. “It would be a dream come true to make it to that point, but it's not necessarily probable, either. If you look at stats and numbers, there's no reason why I'm just going to roll out and win this week, but there's great motivation for me to do that.

“I'm very comfortable with where my game is at, and certainly believe it's in a position where I can put myself in contention this week and if I got there, the motivation to win would be that much more than just winning a trophy; but win a tournament and achieve the No. 1 ranking potentially with that, would be a great way to do it, I think. It would be a great story for myself, anyway.”

Photos: Adam Scott through the years

Scott will get a first-hand look at his competition for the No. 1 ranking, as he’s grouped with Woods (and third-ranked Henrik Stenson), beginning at 12:39 p.m. ET on Thursday.

“I don't know how Tiger feels about it but it's obviously a position he's pretty comfortable with for a long time throughout his career, and I can assure you from knowing him just a little bit, it's a position he probably wouldn't want to give up,” Scott said. “So I don't know that we're going to be trying to play each other head‑to‑head, because we know this field is a lot bigger than the two of us.”

Should he become No. 1, Scott would be just the second Australian to ascend to the position, joining Greg Norman, who held it for 331 weeks. He said he couldn’t fathom remaining there for so long.

“If you get there and that just happens to you and you just don't want to give it up; if that's how you feel, then maybe that's what will happen. I can't even think about that, 300 weeks, that's, what, six years? I'll try and get through today.”