You Oughta Know: Fowler eyes another win at Quicken 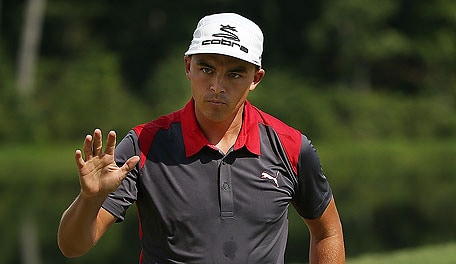 After 54 holes of the Quicken Loans National, Rickie Fowler is still very much in contention for what would be his third worldwide win in less than three months. Here's what You Oughta Know heading into the final round at Robert Trent Jones Golf Club, where Fowler sits just one shot off the pace:

• Fowler shot a 68 in the third round and at 13 under, he trails Troy Merritt and Kevin Chappell by a shot. Fowler won the Players Championship in May, and then added a victory at the Aberdeen Asset Management Scottish Open last month.

• At No. 8 in the world, Fowler is the second-highest ranked player in this week's field behind only defending champion Justin Rose (No. 7).

• Both Merritt and Chappell have yet to win on the PGA Tour. Merritt matched his season low with a 61 in the third round, moving from seven shots off the pace into a share of the lead. He previously held the 54-hole lead at the RBC Heritage in April, where he finished third.

• Merritt picked an opportune time to fire a low round. He entered the week at No. 123 in the FedEx Cup points race, with only the top 125 later this month qualifying for the postseason, and had missed the cut in each of his last five starts.

• Chappell finished T-8 at the John Deere Classic last month, but he has only one other top-10 finish this season. While he has yet to win, Chappell did finish second at both the 2011 Valero Texas Open and the 2013 Memorial Tournament.

• Since its inception in 2007, this event has never seen a first-time winner capture the trophy, a streak that both Merritt and Chappell could end on Sunday.

• Playing alongside Tiger Woods in the third round, Charles Howell III shot a third straight 67 to grab a share of fourth, two shots off the pace. While he is 25th on the PGA Tour's career money list, Howell has not won since the 2007 Northern Trust Open.

• David Lingmerth is alongside Howell at 12 under, two shots back. After his breakthrough win at the Memorial this summer, the Swede also contended at The Greenbrier Classic last month, where he finished T-6.

• Jason Bohn is also T-4 as he continues a quietly solid season. Bohn has a pair of runner-up finishes (Sanderson Farms Championship, Crowne Plaza Invitational) and held a share of the 54-hole lead at The Greenbrier before finishing T-13.

• Rose sits at 11 under, three shots back as he looks to win this event for the third time on the third different golf course. He captured the trophy in 2010 at Aronimink in Pennsylvania before beating Shawn Stefani in a playoff last year at Congressional.

• After playing his way into contention through two rounds, Woods fell well off the pace with a Saturday 74. At 5 under, he will begin the final round in a tie for 42nd, nine shots behind Merritt and Chappell.

• While he likely won't win, Woods could still card three rounds in the 60s - and even record a top-10 finish - both feats that he last accomplished at The Barclays in 2013.