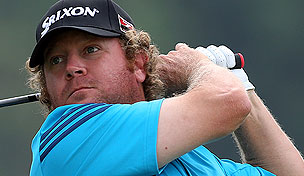 Getty Images
Fans found other ways to fill their time while waiting out the wind delay on Saturday in St. Andrews. Grill Room was on the scene.  -

William McGirt has yet to win on the PGA Tour, but that could all change Sunday at Riviera. Here's what You Oughta Know heading into the final round of the Northern Trust Open, where McGirt holds a two-shot advantage after a Saturday 65:

• McGirt has been on the PGA Tour since 2011 and has tied for second at the RBC Canadian Open each of the past two years. The 34-year-old's best finish on Tour this season is a tie for 19th at the Waste Management Phoenix Open two weeks ago.

• Charlie Beljan was a runner-up here last year, but is now in position to improve on that finish. Beljan, who lost in a sudden-death playoff to John Merrick in 2013, will begin the final round tied for second, two shots behind McGirt and in search of a second career PGA Tour win. Six of Beljan's last seven rounds at Riviera have been 68 or better.

• Jason Allred needed to survive a Monday qualifier just to earn a spot in this week's field, but he's made the most of his opportunity and sits at 9 under through three rounds, three shots behind McGirt. The last Monday qualifier to win a PGA Tour event was Arjun Atwal, who pulled off the rare feat at the 2010 Wyndham Championship.

• This may come as a shock, but Jimmy Walker is once again in contention at a PGA Tour event. Walker, who won last week at Pebble Beach, now has three wins in his last eight starts and will tee off Sunday four shots behind McGirt in a large tie for sixth. The last player to win in back-to-back weeks on Tour was Rory McIlroy, who won the Deutsche Bank Championship and BMW Championship just six days apart in 2012.

• George McNeill will begin the final round tied for second and could be headed for his best finish since winning the 2012 Puerto Rico Open. McNeill has made 45 starts since leaving the Island of Enchantment with the trophy two years ago, but across that span has notched only one top-10 finish - a tie for seventh earlier this season at the Frys.com Open.

• Two players who came up just short last week at Pebble Beach are again on the leaderboard this week with hopes of completing a Sunday comeback in Los Angeles. Dustin Johnson finished one shot behind Walker a week ago, while Jordan Spieth tied for fourth; this time around, Johnson stormed out to an early lead Thursday and has remained in contention, while Spieth bounced back from a rough opening effort with rounds of 66 and 67. Both will now begin the final round at 8 under, tied for sixth and four shots off the lead.