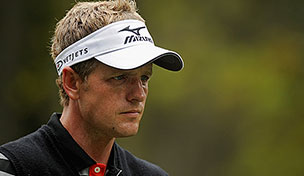 Getty Images
NEW DELHI, INDIA - MARCH 08: A floodlite view of the eigth hole prior to the start of the Hero Indian Open at Dlf Golf and Country Club on March 8 2017 in New Delhi, India. (Photo by Stuart Franklin/Getty Images)  -

Luke Donald has had a number of close calls at Harbour Town, but through three rounds he's in position to finally slip into the tartan jacket. Here's what You Oughta Know heading into the final round of the RBC Heritage, where Donald holds a two-shot lead:

• Donald's recent track record at this event is unrivaled, with four top-three finishes since 2009. He lost a playoff to Brandt Snedeker at Harbour Town in 2011, and last year he finished two shots out of a playoff between Graeme McDowell and Webb Simpson. In total, 13 of his last 23 rounds in this event have been in the 60s.

• Donald was the top-ranked player in the world as recently as August 2012, but since then he has fallen to No. 29 - his lowest ranking since January 2010. His last win on the PGA Tour came more than two years ago, when he survived a four-man playoff at the 2012 Valspar Championship.

• Donald could become the first European to win on the PGA Tour this season. Thus far in 2013-14, 18 of 22 tournaments have been won by Americans, while the remaining four were all won by players from Australia.

• John Huh has struggled this season to find the form that netted him a victory along with PGA Tour Rookie of the Year honors in 2012. The 23-year-old has missed six cuts in 13 starts this season, and his lone top-25 finish entering this week came at the OHL Mayakoba Classic, where he tied for 23rd.

• Like Donald, Jim Furyk has had some success at Harbour Town, with a win in 2010 to go along with a pair of runner-up finishes in 2005 and 2006. Furyk will enter the final round at 5 under, three shots behind Donald, as he seeks his seventh top-10 finish at this event since 2003.

• Charl Schwartzel donned a green jacket in 2011, though his win at Augusta National still serves as his lone victory on the PGA Tour. The South African has made the cut in four of six starts this season, but has turned each of those four into a top-20 finish, including a fifth-place showing at the Northern Trust Open.

• Nicholas Thompson briefly held the lead during the third round, and he will tee of Saturday alongside Furyk and Schwartzel in a tie for third. Thompson, whose sister Lexi won the Kraft Nabisco Championship earlier this month for her first LPGA major, is in search of his first win on the PGA Tour. His best career finish came in 2008, when he tied for second at the now-defunct Ginn sur Mer Classic.

• Matt Kuchar has three straight top-10 finishes, and he is now in line for a fourth as he enters the final round in a tie for seventh. He'll need to overcome recent struggles on Sunday, though, as Kuchar's final-round scoring average since March is 73.8. He hasn't broken par in the final round since a closing 66 at the Sony Open in January.