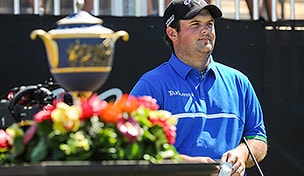 Getty Images
David Duval was on the way to establishing himself as the world’s No. 1-ranked golfer when he won the 1998 Shell Houston Open. Duval had won three times in late 1997, including the Tour Championship, and had won in Tucson in February 1998. In Houston, he closed with a 64 to edge local favorite Jeff Maggert, who had grown up near Houston and still lived in the area. Duval ended up leading the money list in 1998 and ascending to the No.1 ranking the following year.  -

A world-class leaderboard is currently headed by a player in just his second year on the PGA Tour. Here's what You Oughta Know heading into the final round of the WGC-Cadillac Championship, where Patrick Reed holds a two-shot lead:

• Though he was battling through Monday qualifiers just two years ago, Reed is now in search of his third career PGA Tour win. He captured the Wyndham Championship last August in a playoff over Jordan Spieth, then added the Humana Challenge title two months ago after opening with three straight rounds of 63.

• Reed has won before on a big stage, having guided Augusta State to back-to-back NCAA championships in 2010 and 2011. Despite past success, though - not to mention his play through three rounds in Miami - Reed has never before played in a major championship, a stat he will rectify when he tees it up at the Masters next month.

• Hunter Mahan will begin the final round at 2 under, just two shots behind Reed. A winner of both the WGC-Bridgestone Invitational in 2010 and the WGC-Accenture Match Play Championship in 2012, Mahan could join Geoff Ogilvy with three career WGC titles, trailing only Woods (18). A win would also allow Mahan to join Woods as the only two players to win three different WGC events.

• Woods cruised to victory here a year ago, but will need to come from behind in order to defend his title at Doral. Woods trails by three shots through 54 holes, a deficit he last overcame at the 2012 Memorial. In that event, Woods trailed Spencer Levin by four shots heading into Sunday, but went on to win by two after a final-round 67.

• Though he failed to make a birdie during a second-round 77, Jason Dufner bounced back with a 4-under 68 Saturday and as a result will join Reed in Sunday's final pairing. After capturing his maiden major title at the PGA Champioship in August, Dufner is in search of his fourth career PGA Tour win and first victory in a WGC event.

• While much attention will be paid to Woods Sunday afternoon, Jamie Donaldson will begin the final round alongside him at 1-under 215. The Welshman carded the low round of the day Friday, a 2-under 70 in blustery conditions, and now eyes his first career PGA Tour title. Donaldson’s best prior finish in the U.S. came at the 2012 PGA Championship, where he tied for seventh.