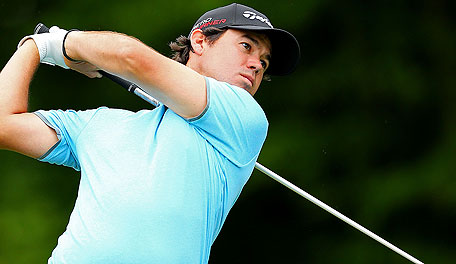 The southpaws are in control so far at the Travelers Championship, but with one round to go the trophy remains very much up for grabs. Here’s what You Oughta Know heading into the final round at TPC River Highlands, where Bubba Watson trails Brian Harman by one shot:

• Watson led by two shots after each of the first two rounds, and he now sits in a tie for second heading into the final round. He earned his first career victory at this event in 2010, finished T-2 in 2012 and fourth in 2013.

• Watson missed his first cut of the season last week at the U.S. Open. He began the season with five straight top-15 finishes, including a win at the WGC-HSBC Champions, but hasn't cracked the top 35 in his last three stroke-play starts.

• Watson is looking to become the seventh player to win this event multiple times and would join Jordan Spieth, Rory McIlroy and Jimmy Walker as players with multiple wins this season.

• Harman holds a 54-hole lead for just the second time. He converted his lone prior opportunity into his maiden win last year at the John Deere Classic.

• Watson and Harman both played for the University of Georgia. Watson played his final season for the Bulldogs in 2001, while Harman graduated in 2009.

• The pole position has been a tenuous spot in recent years at TPC River Highlands. Four of the past five Travelers champions have come from at least two shots back in the final round, with Freddie Jacobson's 2011 victory the lone instance where a 54-hole leader hoisted the trophy.

• A one-shot lead also hasn't been very easy to close on the PGA Tour recently. This is the 21st time over the last two seasons that a player has carried a one-shot lead into the final round, but only five of the previous 20 went on to win.

• Graham DeLaet is tied with Watson at 13 under, one behind Harman. DeLaet is making his 123rd PGA Tour start this week and has racked up more than $8.1 million in career earnings, but the Canadian is still in search of his first victory.

• Paul Casey is alongside Snedeker at 11 under. The Englishman lost in a playoff earlier this year at the Northern Trust Open and earned his lone PGA Tour win at the 2009 Shell Houston Open.

• The top four finishers (among the top 12 and ties) not otherwise exempt will earn spots into next month's Open Championship. The top names eyeing bids to St. Andrews include Harman, DeLaet and Chris Stroud, who is alone in seventh at 10 under and who lost in a playoff at TPC River Highlands in 2013.