Z. Johnson grinds out 71 to stay in Open contention 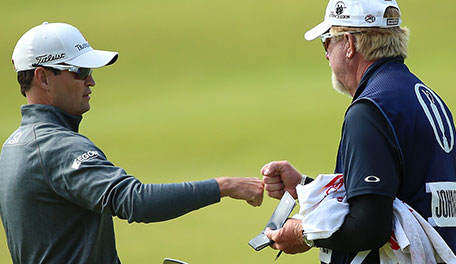 ST. ANDREWS, Scotland – For the second consecutive day, Zach Johnson cruised through his opening loop at St. Andrews and did what he does best – grind, on his way to another solid round at the Open Championship.

Johnson followed his opening 66 with a 1-under 71 that, considering the conditions, was a reason for the American to remain optimistic going into the weekend.

But his day didn’t start with a great amount of optimism when he arrived at a swamped golf course and a steady downpour.

“My mindset was, let's hope there's a delay. But I thought that mindset was pretty farfetched, considering it is the Open Championship, and you expect brutal conditions at times,” Johnson said. “You expect the first tee, here you go, here's your peg, here's your ball, go play.”

R&A officials, however, quickly suspended play – after just two groups teed off – for more than three hours. That allowed the course to drain and Johnson took advantage, shooting a 2-under 34 on the front nine. Although he made back-to-back bogeys at Nos. 11 and 12, he was still pleased with his round.

“I feel like I played just as well today, I just didn't score,” said Johnson, who was tied for second place at 7 under par when he completed his round.